Homerunning coaching Efficient Running – What Does It Look Like?

We don’t all have to look exactly the same, but we are all human and there will be similarities.  The aim is to run in a more natural way, accommodating the musculo-skeletal anatomy, and avoiding injury.  Common mistakes which your body won’t like in the long run (‘scuse the pun!): 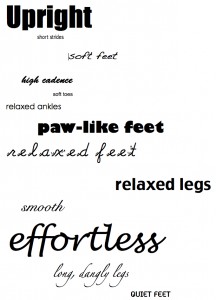 Midfoot/forefoot running does NOT mean you bounce around on your toes!  Your feet in general won’t like this at all, as they are doing way too much work!  The feet make the contact with the ground (albeit briefly) – otherwise you’d technically be flying – but they don’t do the work of forward motion, they do the work of carrying you.  If you let the feet relax, and touch down quietly, you will almost always (I would say ‘always’, but they’ll always be one!) end up with the power coming from where it should – the buttocks and hamstrings.

Toe-y forefoot running with a lollop, often ends, literally, with the toes stabbing into the ground.  Apparently, the ‘culprits’ do it because it feels as if that’s what the book meant when they read about it (and they saw it on the computer somewhere).  Not only is it not efficient, you look like Tigger, and you’re increasing your chances of nasty blisters on the balls of your feet.  On your next run, include a short distance of gravelly/stony track – and turn off your iPod along this section!  The aim is to run along it without dislodging the stones.  You will amaze yourself with the lightness of your feet, the quickness of the turn-over of your feet, and the effortless increase in speed.  Incorporate this idea regularly in your runs to check your technique and nip bad habits in the bud.

Toe-y forefoot running sometimes results in slower running, which is a reason some runners give up and go back to heel-striking, which they can do quicker.  I can understand that – who wants to change to something that’s slower, and therefore clearly inefficient?  It’s arguable that there’s no such thing as slow running – what you’re doing is jogging, which is almost impossible to do naturally, ie without shoes on.

A quiet, soft, relaxed foot touches the ground only very briefly, and because the foot can only be relaxed and soft and quiet when you’re upright, which shortens the stride, you’ll find the next footfall arrives quickly after.  The stride may be shorter than you’re used to, but the speed of the foot turn-over (cadence) is fast, so slowing down is not really possible.  When directing on the treadmill, we don’t change the speed when changing a runner’s technique!

Heels have a place in forefoot running … it’s just not at touchdown!  Your initial contact with the ground, is somewhere at the end of the long foot bones, behind the toes, on the outside of the foot.  With a relaxed foot, your heel will then descend under the load of the body above.  Unless you are running uphill, your heel will probably just touch the ground, before you roll forward again through the toes.  Think of your heels ‘kissing’ the ground.  It will be more comfortable and less tiring.

Remember: if the toes are doing the work, your buttocks and hamstrings are probably not working to their capacity and are having a bit of a break.  Which muscle group would you prefer to run with?

Try this coaching download to reinforce this article whilst you run, getting you into good habits and away from bad ones: