Ironman Training in the Pyrenees 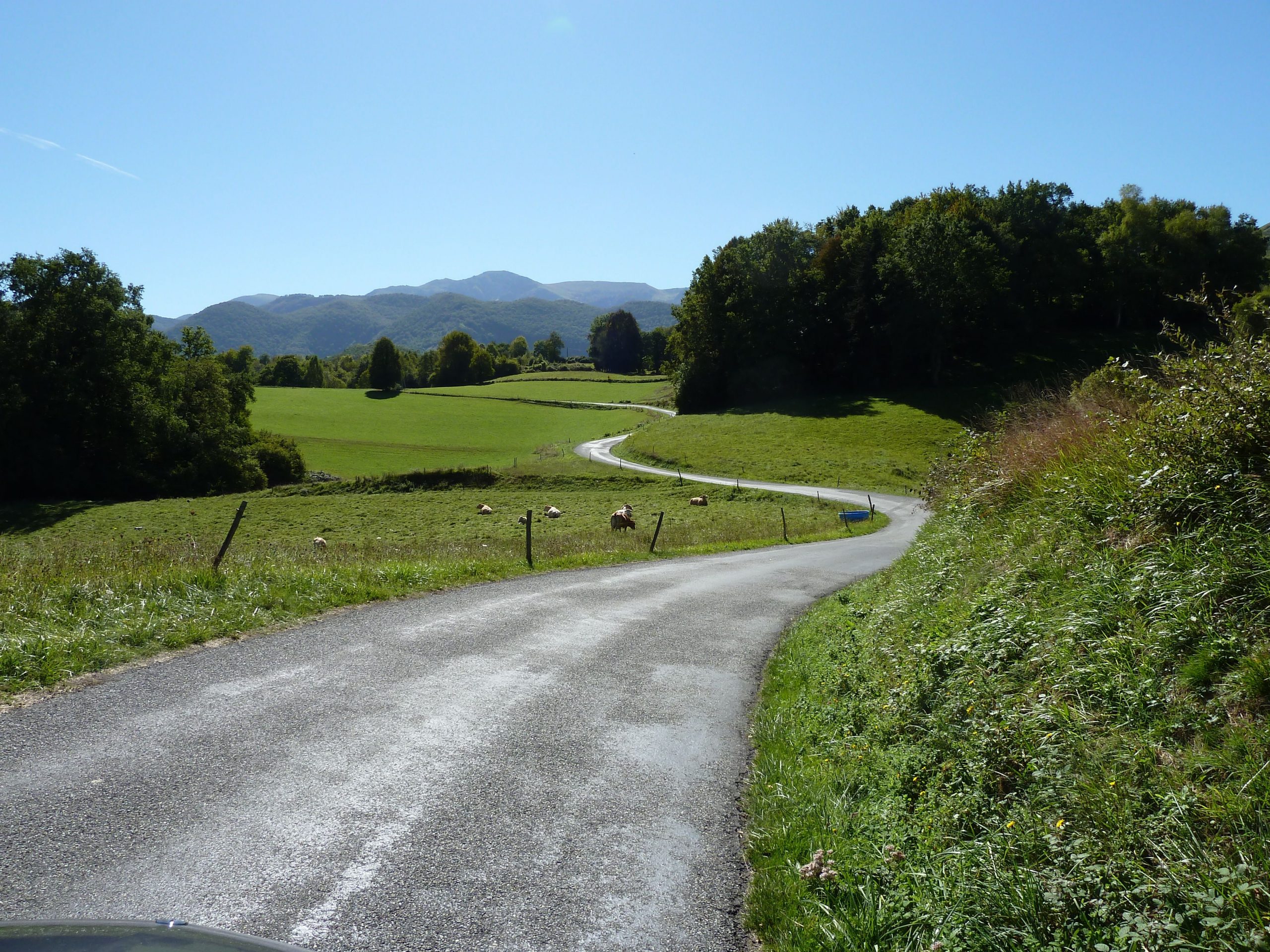 October 20, 2010 By Helen Comments are Off col climbing, cycling in pyrenees, pyrenees, training

… fond memories …. oh, how ‘green’ were we!  TdF, Wiggo and Olympic efforts have brought it all back … 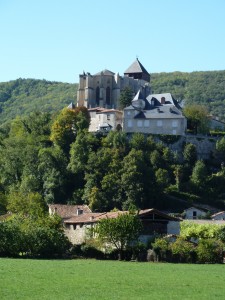 Stunning every which way you looked

Training in the Pyrenees – Day 1

The idea was just a little 45 miler to wake up our bodies following the 14 hour drive down to our base, south-west of Toulouse.  Our host had given us the map, mentioned a long, slow climb without any emphasis of distance or effort involved, and as the naïve little fledgling Pyrenean apprentices we were, off we went.  There was a little climb here, and a little climb there, and we were pretty pleased with the way things were going.  Pleased enough with the ride so far to stop for deux grand cafés and a baguette sandwich.  We rolled back out of the village, and turned the corner.  The sign stopped us.  Could that be right?  Something about 8km of climb?  What – without a break?  What is this? 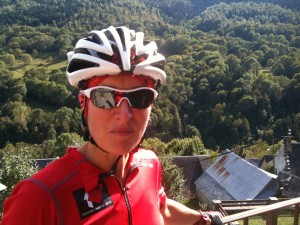 How much climbing did that say?

‘This’ turned out to be ‘Col des Ares’.  8km of climb – that’s 5 miles of UP folks.  5 miles, climbing over 300m, which outrageously, registers in at one of the ‘smallest’ cols around. The long grind seemed interminable, and the equally long descent was freezing.  I had packed for late summer in the South of France – so the usual UK summer riding gear, with arm and knee warmers and a shower jacket, just in case.  I was now wearing everything I’d brought with me, all at once (including 2 pairs of tri shorts on top of each other) and I was still freezing.  It took an extremely long shower and a few star jumps to thaw out.  We’d lost our Col Virginity, and in the process discovered we preferred the short sharp shock treatment of the Chilterns Hills, after all.  Never again will I complain about Frith Hill at the end of a ride – it looks like a ‘slope’ after today.  Perhaps we could find some less mountainous countryside to play in over the next 2 weeks?

Training in the Pyrenees – Day 5

Well, Julie had said that the Port de Bales climb was not as hard as the Col de Tourmalet … and the boys from Newbury had managed it the day after their encounter with sleet at the top of the Tourmalet … so, armed with only a little confidence, and dubious visibility, we thought we’d give it a go.  At the beginning of the climb, the enormity of the task was there in front of us, in black and white.  The board said:

It started innocently enough.  5% and 4% gradients, signed at each kilometre marker.  Taking it easy, pacing ourselves, we thought, ‘yes, we can do it’, ‘keep on rolling’ … With 12km to go, the vegetation changing, the air getting thinner, we turned the corner to the next kilometre sign … 8%.  OMG – it was looking vertical.  The road had narrowed and we were now in cloud.  Even excuses to stop for photo opportunities had disappeared.  9% … 10% … ooooh, respite, 9.5%!!  God this was FAR, and STEEP, and most probably, simply beyond us.

Then there were cows in front of us, descending – cows … with horns.  What was the mountain protocol for this?  Did one stop, slow down, race past (yeah, right!), back off?  We plumped for ‘ease right over to the other side and pass really gingerly’ – and succeeded.  Then we saw that the cows were being herded by a chap wearing the biggest beret we’d ever seen, with the swarthiest, wrinkliest skin we’d ever seen, driving the most clapped out Citroen we’d ever seen, with the grumpiest face we’d ever seen.  You could write books on this!

Onwards and upwards.  Ever upwards.  Never-endingly upwards.  Would the end never come?   In cloud, we’d lost the visuals of how high we were, but the anxiety levels left us in no doubt as to the scale of the drop just to our left.  The drop was sheer, and without arrest.  Nerves were jangling, heart rates thumping. 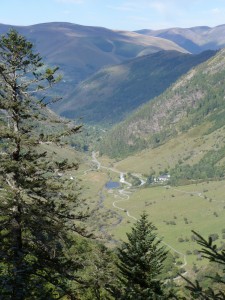 Finally, unbelievably, we reached the summit.  Nerves having got the better of us, we finally got to empty our bladders safely at 1755m ……

……and got back into the car.

And people cycle these buggers?

Training in the Pyrenees – Day 6

After an exhausting day yesterday, dodging the crazy Pyrenean climbs and having a little explore, Brian suggested a little flat 60km round trip to the spa town of Luchon and back.  Very do-able I thought – not terribly Ironman, but we are on holiday after all!  The offer of lunch in Luchon, basking in the glorious late summer sunshine, nailed the plan for me.  Sooooooo, a 30km time trial later, climbing 200m in the process, we arrive in Luchon with quads a-pumping.  I could taste le Grand Café.  With my quads on fire, I deserved it.  Before I could even smell the coffee, he was onto the next idea … ‘how about we ride just the beginning bit of the Col de Peyresourde?’  (That’ll be the steep bit at the bottom).  ‘We’ve only cycled for an hour – we don’t really deserve lunch yet.’ !!!  So off we go, apparently to burn a few more calories to make a naughty lunch legit.

90 minutes,  14km,  and 1000m of mainly 8% gradient climbing later,  we arrive at 1569m – the summit of Col de Peyresourde, a Tour De France Category 1 climb!  Forget a Grand Café – the only possible order was omelette, frites and an orangina.  They disappear in quick time.  The descent was hideous.  Dire warnings of ‘you must descend on your drops or it could be fatal’ were ringing in my ears.  The problem was, with my trapped nerve, being on my drops made my left hand go completely dead in about 5 seconds.  So, the hoods it had to be – and by the time I finally found Brian grinning at the bottom, my frozen hands appeared to be stuck to them.  Operation Return to Base.  Given we’d climbed 200m to Luchon, you’d be forgiven for expecting a nice easy ride home.  But you’d be wrong.  Head wind.  Even on the downhills, my legs were still pumping.  Should be feeling quite Ironman after that little jaunt.  My day for ‘wrong again’.  Utterly knackered. 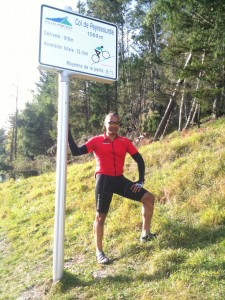 Ironman Training in the Pyrenees – Day 7

Wanting respite from the agonies of being anywhere near handlebars, I decided we now needed a bit of run training.  We asked Ian about some off-road trail runs, and his untamed enthusiasm for their favourite off-road run, led us back off towards Luchon, but this time, turning off to the unlikely named Lac d’Oo.

‘The run route from the parking to the lake is only about 3.5km’, he said, ‘but you might find it’s far enough’.  The clue, had we been looking for one, was in the next sentence.  ‘Take small steps on the way back, or your quads will be trashed for days.  We had one guy here who raced the return leg and had to slide down the stairs on a duster for 4 days’.  We laughed – but without comprehension it turns out.

Fully kitted out in our long distance run kit (Fivefingers and a back-pack), we launched off, following the well-signed track.  Our outbound run section lasted, oh – let me see – 50m?  Even walking the gradient was tough.  I should have remembered I was asking the opinion of a successful Marathon Des Sables ultra runner, and needed to put anything he loved into some kind of perspective.  We managed to run back down though!  With our Fivefingers causing a stir everywhere, we twinkle-toed our way back to the car, with off-road barefoot running grins wrapped round our faces.  AND, we could walk the next day without problems … We weren’t crippled by DOMS quads until day 9!!!