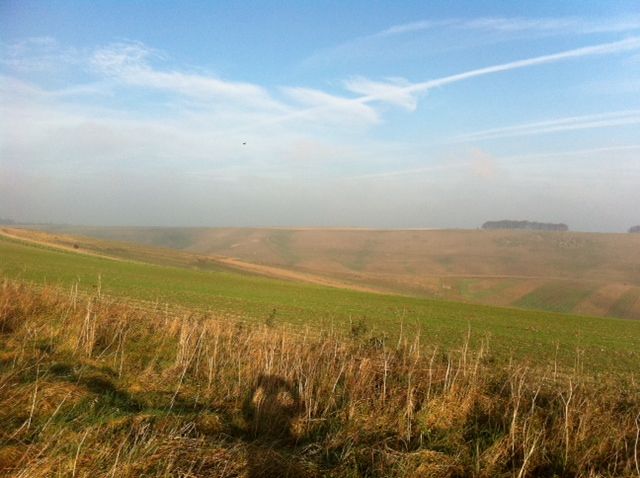 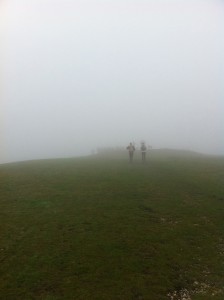 Ah – there they are!

In brief, and without toilet stops, here’s my latest ‘race’ report (don’t bother with the kettle, you’ll not need it!)
The Druid Challenge is a multi-stage 3 day race along the oldest roadway in the UK, dating back to 3000BC.  The route starts at Ivinghoe Beacon, Bucks and follows 84 miles of ‘The Ridgeway’ to Overton, near Swindon … in Wiltshire!  We launched at a most incredible moment …

Brian and Martin egging each other on, on their first foray into ultra distance running.  They were both to complete distances significantly further than they’d ever run before – and were still smiling at the end.  Matt, who met us at CP3 also deserves a shout – he ran from the end, to CP3, picked up what was left of me in the dark and led me home.  It was further than he’d ever run too … a day of PBs!

We ran with hope – and because we could, whilst so many can’t – along muck, mud, slimy chalk, rough grass, springy grass, stony tracks, root-ridden, leaf-covered trails – oh and bliss … a little bit of easy tarmac … every now and then!  Up hills, down hills, up more hills … and yet more hills!  Did I mention hills?  These Druids were a hard lot!

The Cabbage Fields! As far as you could see of furrowed, slimy mud … followed by a hedge … and a repeat performance …’long tall tales over a glass of red’ material!

Day 3 brought ‘reveille’ on Wantage Leisure Centre sports hall floor at 0530 hrs [daily top sleep spots courtesy of Kate and Sarah, who always arrived ahead of me to bag a good ‘personal space’!].  For some of the walkers who’d only arrived ‘home’ at 2130 hrs the previous evening when many of us were already snug in our sleeping bags , that was pretty tough!  I got lost again (the brief was ‘follow the Ridgeway ‘Acorn’ … how difficult can that be??) just before Check-Point 3 at 21 miles.  I was feeling great until then, but the realisation that the clock was ticking whilst I was trying to work out whether to carry on or retrace my tracks, and that yet again I was running an extra mile – taking my total that day to 29 , and my overall challenge to 87 – was demoralising, with a capital D.

I’d heard that the ‘end’ was Alexandra Hotel near Barbury Castle.  In my optimistic head, that meant next to Barbury Castle.  I ran up the long gradual climb, across beautiful short turf for several miles towards the castle with utter joy and a lightness in my running stride.  It was a beautiful day – a complete contrast to the previous two murky, dank, miserable ones – and it was a complete pleasure to be out running.

The arrows were followed (carefully!), and I found myself running down an 18% hill.  That was tough.  Half-way down I asked someone I passed where the end was.  “In the village, over yonder”, he said.  “Over Yonder”???  Total confusion reigned.  Number 1 – who speaks like that?  Number 2 – the only village I could see was truely “over yonder” … in the distance, and up a distinct gradient!  It was all too cruel.  I put my head down and just kept running – and that was as tough as I’ve ever experienced tough.

And then I turned the corner, saw the Extreme Energy flag marking the end of the adventure – and lost the ability to breathe.  My heart was stuck in my throat, and I was sucking at the air trying to get some through the tiny gap left.  I’m known for smiling through everything, but no matter how hard I tried down the last few 100 yards, all I managed was a watery grimace.  I could hear my running mates shouting my name, and my husband calling me home.

This was as GOOD as it gets.

The Extreme Energy XNRG team were tirelessly wonderful.  Led by Neil and Anna (Anna’s mum made the most amazing apple pie and cream on the first evening!), all the volunteers and marshallers who stood in the wet and the dark, encouraged and enabled us runners to achieve our hopes and our potentials.  There’s no glory in ultra-distance running events, no fanfares, no dancing girls, no crowds of 100s and 1000s, no DJ or celebrity character calling out your name as you run down the red carpeted finishing straight – but Neil and his team are endlessly supportive, they believe in you, and it makes a difference.  It meant that crossing the finishing line was the sweetest moment, and my Druids medal is my BEST medal so far!