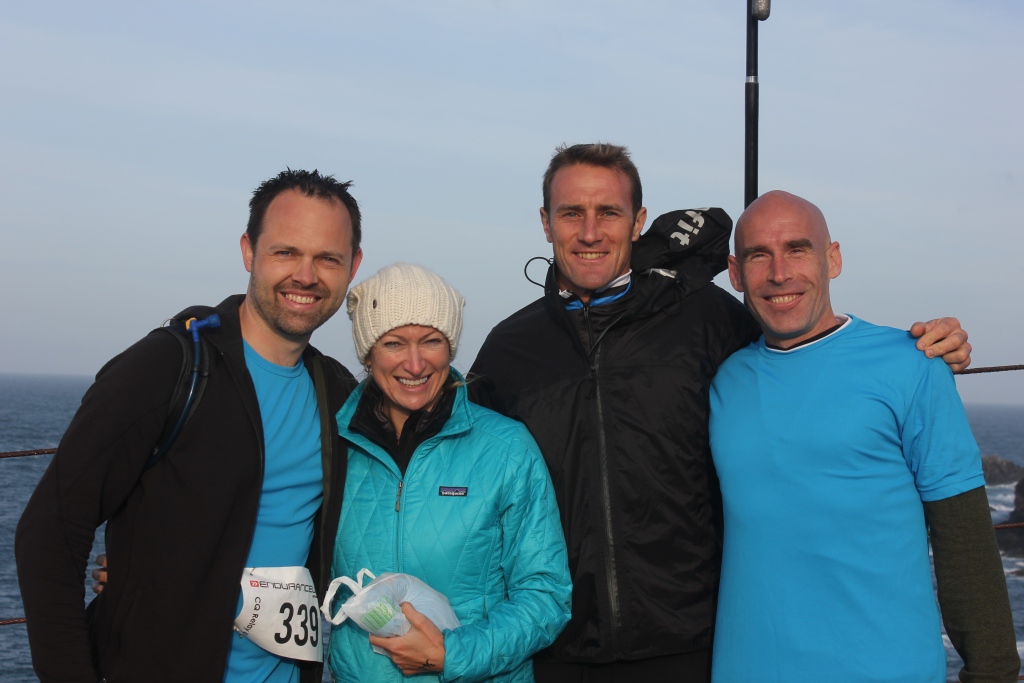 I went on another learning journey yesterday – the ‘Barefoot Connections Conference’, masterminded by Matt Wallden, who brought Vibram Fivefingers into the UK, connecting the product to his Chek practitioner work on our primal movements.  The location set the scene – The National History Museum, with the start next to Dippy the Dinosaur – and on a lovely morning, we launched the day with a 5k run with Barefoot Ted.  There were about 30 of us, and I watched with amusement as Matt issued Ted with a map of the immediate surroundings. Memories of the previous weekend’s ‘Team Shambolic’ adventures sprang to mind – reinforced when one of the enthusiastic runners pointed out a fatal flaw with Matt’s attention to detail … that particular turn in Hyde’s Park had a 14 foot high chain link fence across it, courtesy of the Olympic preparations.  In true Shambolic style, we figured we’d work it out when we got there. 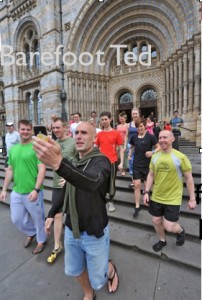 Barefoot Ted led and I was the Broom Van.  Paying no heed to my favourite warm-up procedure he set off at lickity-spit pace with his entourage bravely showing no sign of discomfort.  In no time we were swarming through the entrance of Hyde Park and obediently following the paths, despite interesting foliage in our peripheral vision tempting us off-route.  The running train soon started to break up into carriages, as the faster runners stuck on BFT’s shoulders and the less fleet (or less awake, or even, more sensible) fell behind.  Thankful I’d been tasked with the job of not losing anyone, I trotted on in my comfort zone.

Wondering if I was going to lose sight of the lead group as they disappeared into the distance, I became aware of several familiar-looking runners coming back towards us … Barefoot Ted (easily spottable by his cut-off jeans, airily cotton sweater and sandals) plus several others, all perusing Google Maps on their phones.  “They’ve gone too far”, he said by way of explanation as he sped past “I’m going back” … coffee was on the agenda again …

The impressively grand architecture of The Natural History Museum welcomed us back, with Ted’s acute sense of distance being backed-up by our own Garmins – 5.1km done in far too few minutes for my liking … I was only just warming up and now it was all over!  Quick shower and sustinence and then it would be time for brain-matter to be stimulated. 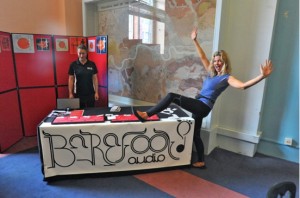 We said goodbye to the sunshine and went inside to set up our Barefoot Audio stand.

Kirsty had made breakfast.  A raw chocolate concoction of breakfast heaven.  Assured that this was ‘good for you’ chocolate, I tucked in whilst we got busy.  Turns out that ‘good for you’ didn’t mean ‘me’ (I’m allergic to strawberries too) and I missed the first two presentations due to ‘alkaloid sensitivity’ (the bitter chemical present in green superfood) … what is it about me and inopportune bathroom requirements?  Kirsty had made enough choc for most of the conference attendees, who imbibed with enthusiasm … and during the day we took as many requests for the receipe as we did orders for our downloads – as Paul Chek later said, it was great to have so many health-conscious people under one auditorium ceiling.

I finally made it into the conference theatre as Lee Saxby was taking questions.  A lady was ‘paraphrasing’ his one sentence answer into an essay and he looked perplexed.  Then a chap called Paul (later to be introduced as the Paul Chek) passed a really interesting comment about the danger of reliance on proprioceptive feedback from feet and that it was categorically NOT the whole story. Valuable? Yes. The ‘be-all-and-end-all’?  No. I don’t know how relevant the comment was to the presentation, having not been there, but it was right up my street, and I tuned in enthusiastically. Turns out there is research that shows that if they nerve-block chimpanzees at the lower lumbar/sacral zone, making their feet numb, they can still run. It’s not until the nerve impulses are blocked in the lower cervical spine that forward motion at speed becomes impossible. 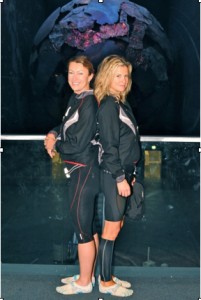 Any triathlete who’s assumed June/July/August in the UK is summer, has left cycling over-shoes behind, and is either racing or performing a training brick session, will know that forward motion (at varying speeds!) is possible, but hideous with frozen, numb feet (which despite being numb are always surprisingly painful).  Last weekend, whilst running my relay leg of Classic Quarter with a prolapsed disc, I had an unfamiliar lack of information from my weirdly-not-numb-but-not-fully-awake-either right foot.  I was still able to run of course, with all my attention focussed on the form of my upper body counter-rotation and the upholding strength of core muscles being endlessly checked-in, but I did get 2 blisters on toes that have never blistered before – the inference being of course that they were as a result of unusual movement in an unusually asleep foot.  At a really basic level of application, the science explains why runners can run in thick, cushioned footwear which absorb the vast majority of proprioceptive information.  We don’t rely solely (oh – did you notice that? Unintended, but love it!!) on sensory information from the very many 1000s of nerve endings in our feet, but it adds to the whole, is information that assists in making the running technique more skilled (therefore with less risk of injury), and, I believe, makes the experience all the more enjoyable when you have it.

Next up was a wonderful insight into Professor Liebermann’s work, presented knowledgably and with humour (which just goes to show that if you love what you do, and you’re an absorbed palaeontologist, you can make what most might suspect be quite a dry ‘old’ subject, relevant and, yes, fascinating) by Dr de Groote.  I learned that we (hominids) became runners, then our brains grew.  I’m just going to repeat that.  We became runners, then our brains grew.  A weekend at the Natural History Museum, and Einstein status is around the corner … I can feel the genius brewing … I expect the next Efficient Running course to be over-subscribed … 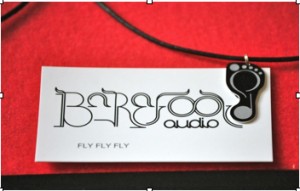 Louis Liebenberg was a delight.  The least likely-looking ‘persistence hunt and tracking expert’ you could imagine, he was that wonderful mix of amazing tales of derring-do with the Kalahari Bushmen told in a statement-like, dry, clipped, South African accent; and with the addition of the ‘clicks’ of the Kalahari tongue, it was ‘edge of your seat’ stuff – and I was sat on the floor! As the stories unfolded, I wasn’t alone in finding my jaw on the floor and googling Cybertracker as soon as I could.

At the end of Louis’ presentation, all I wanted to do was go track a Kudu!

Now I’d heard of ‘Chek‘ through Matt, but I didn’t know anything about it.  The shaven-headed Paul Chek came on with his baggy cotton T-shirt (shoulder, back and chest muscles bulging through said baggy cotton T-shirt), baggy trackies, white socks and Birkenstocks and talked – fast – as only Americans can. I wasn’t sure. It was all a bit fast, furious and … well, bonkers for me. Audience members were nodding sagely, and I wondered what on earth they were all on. Kirsty was watching wide-eyed, totally captivated. I was definitely missing something. And then, as he continued, links here and there started to bring it all together, and there it was: the ‘penny dropping moment’. OMG. I understood. The ‘primal’ thing. The arguments to and fro were done. Shoes aren’t helpful. We know that and we know why. But running barefoot isn’t the exilir of life either (well – except for me!). So if shoes are ‘bad’ and our feet are ‘good’, and those arguments bore us now, why were we here in the Natural History Museum looking at the development of the hominid? Movement. That’s what. It’s all about the suck, push, pull, twist, lunge, squat, lift, jump. Basic (ahhh – now I ‘get’ the primal analogy!) movements we practise over and over again as babies, toddlers and young children – for a reason.  Crack them by the age of 12, and you’ll have a happy, healthy life. Miss a few elements and you can expect injury. Unless you go back to nursery, you’re snookered. Check out this YouTube clip

It cracked me up (especially the comment at the bottom). It’s both too TOO basic and yet so SO i-n-t-e-r-e-s-t-i-n-g; even fascinating. I had to do it. It’s tougher than you think! I’m glad we’ve evolved from being an inchworm. Close-up ground work meant I had to get the hoover out as cool-down exercise too 🙁

With my mind working over-time (with my injury history – bikes and gardening being the main culprits – would I even make it past first base?), Matt stepped in for the finale. His talk was a brain-cell extreme event, of thankfully only sprint distance (I’d have to lie down in a dark room for a while before a long distance session!). He’s quite bright that Matt Wallden. A mind-boggling presentation on the development of movement over time in the 5 dimensions (I think). I was just hanging in there, totally absorbed, then I lost it a bit, then I got it, then it was over, and all I wanted was for him to start all over again so this time I could absorb it a bit better. It was revelationary, in that it revealed stuff, exciting stuff, stuff I want to get my teeth into and work out a way to really understand. It was so tantalising, I wish I’d taped it so I could listen again … I just need to be patient – the cameras were there! If they release it on YouTube, I’ll post the link 🙂

I was so proud. Matt quoted my line in the albums R.O.M. and Towards Flow about the evolutionary hip movement; “like a slightly loose-on-its-hinges see-saw”. And whilst I knew it needed to be there for great, skilled running, I didn’t know where it came from. Now I do, albeit, rather superficially. It’s connected to the 3rd dimension of movement (but don’t quote me on the following – this is from memory!).

With all the brain-cell busting information of the day dealt with, there was a little light relief to finish. I had a short natter (yes, I can do short) about my barefoot journey; Tomas Pilsborg, physio and ultra-runner, did the same; WillPower & Grace had us up on our bare feet and posturing in the aisles with their exercise routine, and trying to copy their extraordinary individual toe movements (I can run for THREE DAYS – why can’t my toes dance independently? I’ve started practicing); and finally we were treated to an impressive demonstration of free running with TeamKinetix, made all the more memorable by the story of the founder who, after a dreadful gymnastics accident which demolished his talus bone (on top of your heel bone), was told he’d never run, jump, perform again. Step in (love it!) Vibram Fivefingers in lieu of shoes and his foot healed and he developed strength the medics said he’d never have. His twisting somersault over the top of his kneeling team-mate proved the point. 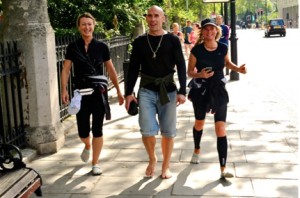 And underlined my personal motto: If you think you can, you probably will.